We've all been there. We see something really cool and creative, but lack the craftiness and know-how to do it ourselves (or in many cases...the time). Welcome to Pinterest....the site that not only shows us the awesome results of these craft projects, but also can lead us to the proper instructions (most of the time).

It was around late April of 2012 when I first caught wind of it...that infamous cake covered in fondant, shaped like a DSLR Camera. As cheesy as it may sound to some, I knew I HAD to have it. With my birthday right around the corner, there wasn't enough time to learn and plan how to make it without it becoming one of those lovely Pintrocities; Pinterest ideas gone wrong. So I waited; ever so patiently for my time.

Forward to just a month ago; mid April, 2013. Almost a year had passed since I'd first seen that DSLR cake, and I still wanted it just as badly as the day I discovered it. A specialized cake is not something I'd grown up with. Granted I had a wonderful neighbor who could make delicious cakes and had the imagination it took to make some really neat looking ones; however I no longer live near enough to her to ask for such a delicious treat. Well, I was about to turn 30, and while I had known I wanted this cake for nearly a year already, time was most certainly not on my side to learn how to make it myself.

Welcome Cake Art of Salisbury. I contacted Susan of Cake Art just a few weeks prior to my 30th birthday with my wishlist for the cake; including photo examples to give her a starting point. I told her I wanted a round base, yellow cake with a DSLR shaped cake on top; the number 30 in the lens, and buttercream frosting. While those were my main focus points and I wanted to give her and the rest of her artists the freedom of creativity, I also gave them color and pattern ideas I liked to give her direction. The rest was up to her on how she wanted design the rest of the cake.

Fast forward to Friday, May 17th, 2013; my 30th birthday. When I stopped by to pick up my finished cake, it was love at first sight. Not only had Susan and her crew created a wonderful looking DSLR cake, but they decorated the rest of the cake in a way that was so fitting to myself and my personality. Just take a look for yourself! 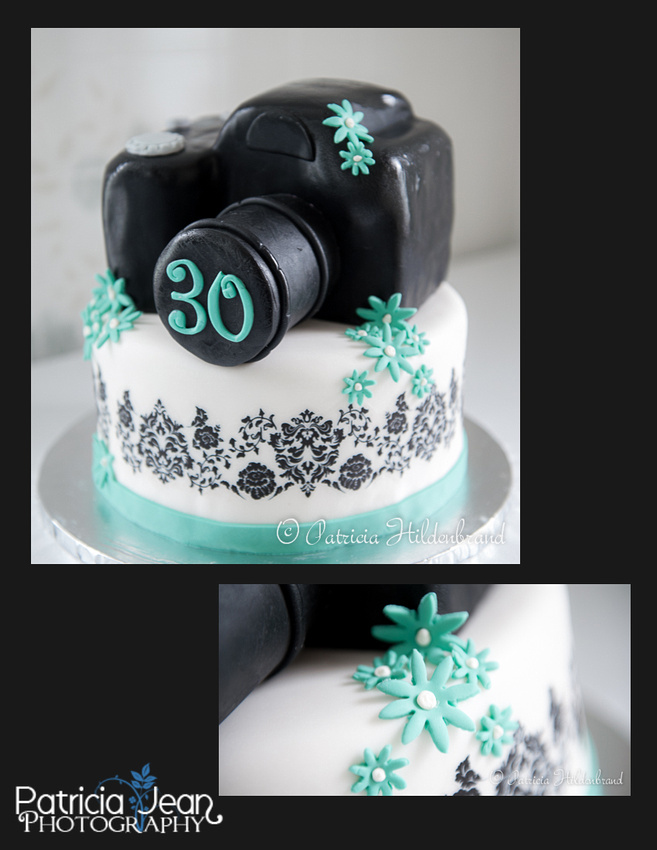